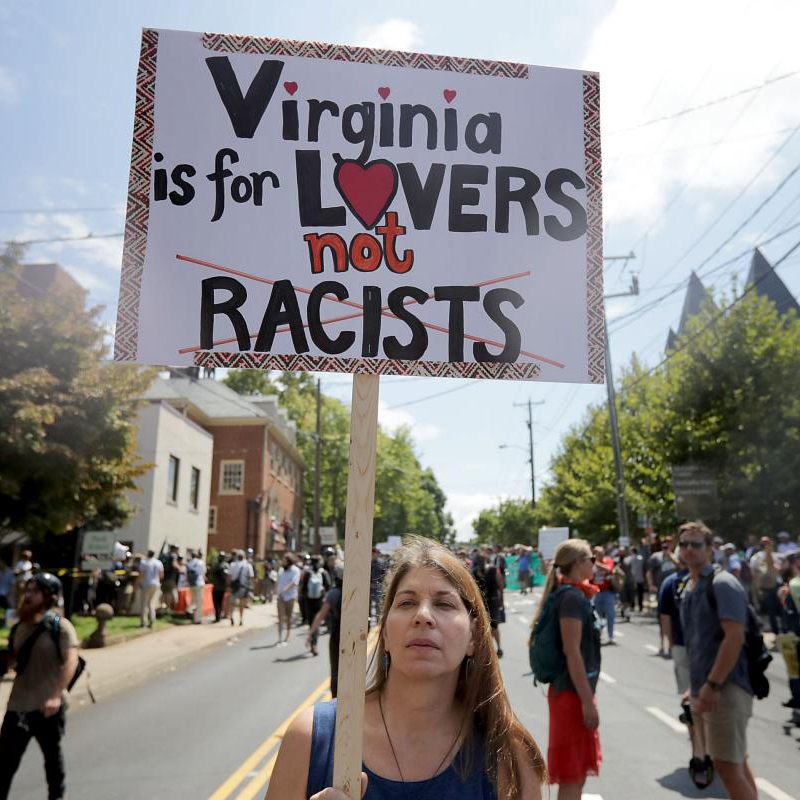 My cousin, Rick, is one of the most eloquent people I have ever met. After the racist garbage in Charlottesville last weekend, he shared this beautiful piece, and it’s one of the best things I have read on the events. I have been stumbling over how to be angry in a productive way all week, these words have helped me to organize the tornado in my brain. There is a lot of work to do.

There’s so much to say, and at the moment, I’m stuck on this:

Forming a mob with guns, torches, and pepper spray, then attacking people in public isn’t legally protected “Free Speech.” Pointing guns at people isn’t “Free Speech”. Neither are threats and intimidation, or harrassment of individuals (online and in public speeches made on college campuses). And they know all this.

But, like internet trolls (in fact many of them are proud, well-practiced internet trolls), they aren’t trying to make coherent arguments for principles (like Free Speech, or the value of statues of Robert E. Lee) — they’re just trying to make people angry, frustrated, and exhausted, and thereby sow chaos and misery among their opponents. They’re quite clear in their manifestos that this is a deliberate strategy of theirs.

They are TRYING to get us to look upon our cherished ideals, including Freedom of Speech, with dismay and despair. They LOVE the fact that their deliberate misuse of the concept of Free Speech causes us to argue with each other angrily and endlessly. And by muddying the waters so deliberately, they obscure the fact that they obviously have never wanted to “peaceably assemble”. These people would have literally no idea what to do at a peaceful assembly. They want to incite chaos, violence, and race riots — with weapons and illegal actions.

Because, as they well know, in the world of actual Free Speech, where ideas are discussed and discredited and discarded, they lost. They lost a while ago. The vast majority of the world hates and mocks their “ideas”. (It’s almost cute how even when they attend an openly nazi rally, they STILL can’t bring themselves to speak to the press about their actual “ideas” — they have to claim to be motivated by things like “History” and “European Culture”, two subjects they clearly have no interest in or knowledge of.) They CAN’T win arguments (on the internet or anywhere else) on the strength of their “ideas”, so they troll instead. They CAN’T get the attention they want or attain any of their other loathsome goals with a peaceful march, so they have a violent one instead.

I myself love *actual* Freedom of Speech. I hate censorship of all kinds. I also have no patience for people who use “Freedom of Speech” as a cover for their various repulsive non-speech behaviors. I think it’s absolutely great that GoDaddy is kicking dailystomachchurner off their server — because congratulating your readers on a murder one of them committed is clearly an incitement to violence and not legally protected speech. I also think it’s great that people have decided, through speaking freely to their elected representatives, that they don’t want statues of Robert E. Lee or confederate flags in their public spaces. Sorry, alt-white trolls, you lost that argument.

Wanna protest? Fine! Protest! Have a sit in, lock arms, sing songs about Robert E. Lee (do you know any?), lie down in front of the statue when the crane comes to knock it over, get arrested, go to court, make a beautiful emotional speech, try to win public approval for your side… oh right, you’re not going to do any of those things, because taking “principled stands” about Robert E. Lee isn’t what you’re really about (what you’re really about is… I’ll say it in a minute). And if you did take such a “principled stand”, it wouldn’t work, because we’ve already heard your arguments and decided they pretty much suck. That’s too bad for you. It doesn’t mean you get to threaten and kill people instead.

Because, alt-white trolls, that IS what you’re really about. You’re really about racism, which for you is about threatening and killing (and in various ways controlling) people who you think are inferior to you (though frankly everyone can see that you’re, to put it mildly, not superior to anybody). In your fantasies, you will have the right to do those things openly some day, but in the real world you won’t, so you retreat into your self-created Stupid Zone of offensive words and pictures, a zone you deliberately make stupider by the minute, where you can sort of pretend that you sort of DO have the right to sort-of-Free-Speech-your-way-into-doing-something-or-other — and then you crawl back briefly into the light of actual reality and you do something like what we saw last weekend. Which is not your right, and never will be.

White people (I am one) have an absolute responsibility to speak out (and take actions) against these alt-right neonazi white-supremacist terrorists and everything they do, and every way that racism (the alt-right’s racism and others’ racism and our own racism) still permeates this society. We don’t have any responsibility to “engage” with their “ideas” because that conversation is over. Getting sucked into a debate about Freedom of Speech is falling for one of their tricks. Freedom of Speech is great, and what they’re doing isn’t it. End of this particular tirade.