In January of 2015, we did our very first interview for the blog with the guys at Alchemy Design, a reclaimed wood furniture company in Phnom Penh. A few months ago, we caught up with Jonathan at their new-ish showroom in BKK1, and talked about how the company has changed since our first meeting, and all the fun stuff that lies ahead.

Before we start, you should know that they are currently running a Kickstarter campaign to, well, kick-start their international reach. Please, do yourself a favor and fund this campaign. There are very few companies that we have faith in like we do this group of awesome humans, and to have their work around the world would make this big blue marble even better.

The past few years have been full of growth for our friends at Alchemy, and when we first met, the company was basically three guys who liked making stuff, working on projects in the front yard when they had free time. Fast forward, and Alchemy is now one of the most recognizable and well-loved brands in Phnom Penh, ready to go international.

The team has changed a bit, and that is no surprise in a city with almost constant turnover. Out of the original three, Jonathan is the only one still living in Cambodia, while Joel works from the US, and Willem is now back in Holland, no longer working with the group. They have grown substantially, and now have a team of 20 employees, working between the showroom and the workshop.

Joel now leads the design side of the business, and prepares the mood boards and overall design concept for all new pieces. Initially, the Alchemy “look” was industrial and rugged, with lots of re-bar and unexpected accents. They have kept some of those elements, but have shifted into a sort of Scandinavian-mid-century vibe, and it works.

Jonathan leads the production team and manages the in-country logistics, expansion, and probably a million other things. In some recent projects, they have partnered with lovely local interior/graphic designer, Nataly Lee, who has a crazy eye for beauty and detail. This combination of super powers has proven very successful. 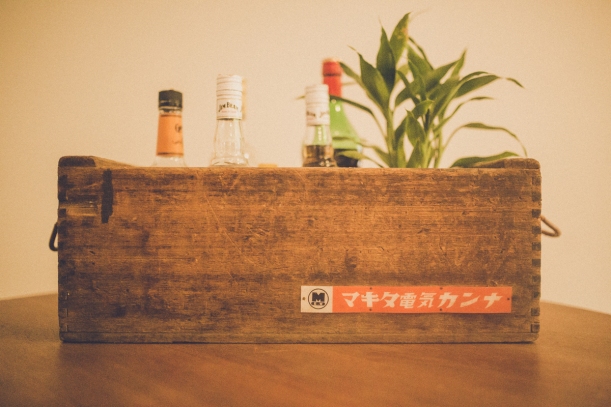 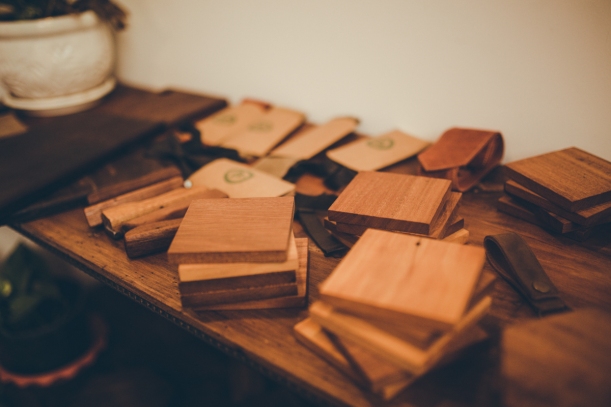 When Alchemy first started out, they focused mostly on custom home furniture, but that has changed as well and they are now working mostly with commercial spaces. They will continue to make furniture for home use, but the model is shifting to a more traditional retail set up, where they have options, and you decide if you want that thing. The amount of growth and reach in Phnom Penh is impressive, and you can see their footprint all over city, from the gorgeous Tonlé shop at the airport, to the clean lines of The Tiger’s Eye, and the uber-cool, always boozy, Elbow Room.

Future plans are to keep roots in Cambodia, but to expand internationally, hence the Kickstarter. They have stayed true to their original mission, and are still sourcing wood from right outside of Phnom Penh, with an NGO that helps with resettlement. A number of Cambodian families are making the switch from traditional wood houses, to more sturdy concrete houses. The NGO connects Alchemy to the families so that they can purchase the wood, rather than the family have to pay for the junk yard to clear it out. They are also now working with an NGO in a nearby province, providing projects for capacity building in woodwork.

When we were talking to Jonathan, he mentioned something remarkable. The traditional style of furniture in Cambodia is shiny, shellacked to an unnatural shade of orange, and usually has an elephant carved into it somewhere. Needless to say, the Alchemy style is a touch different than this. A few of the local team members in the workshop have started to refer to the Alchemy pieces as “awt saat” which literally translates to “not pretty.” It’s become somewhat of a team joke, but this new style of production has allowed these craftsmen to explore other styles of wood working, and become more involved with the design process. He says that many of them work on their own projects during breaks, and are constantly evolving. How cool is that?

Alchemy Design, we love you, and we think you are saat naa (very pretty). Keep going. 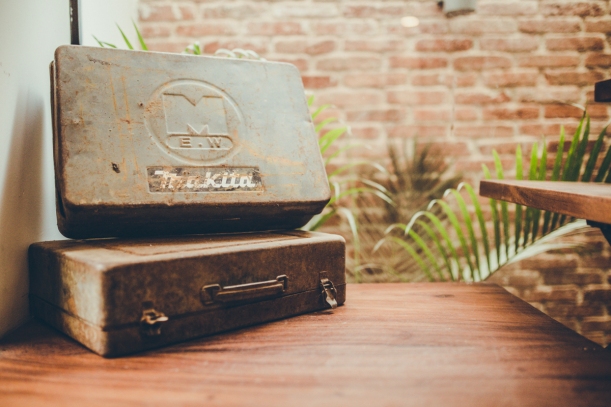 All photos by Tiffany Tsang. Please request permission for use.  We’re not liable for the sudden accumulation of wood in your house. 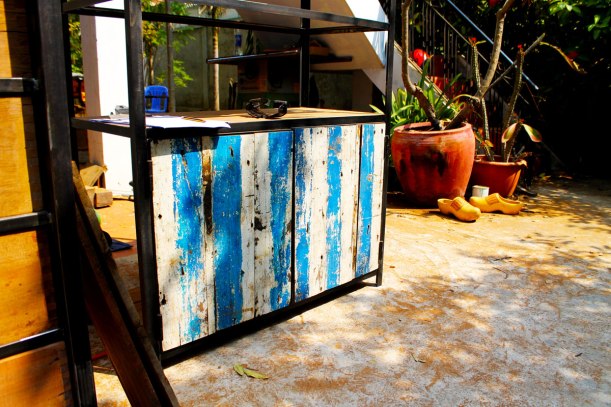 Our first Cool Kids interview happened this past January.  We couldn’t think of a better way to kick off the year. Eight months on, Joel and Willem are overseas, with Jonathan is manning the helm of Alchemy Design Co. in Cambodia. And then this little video showed up the other day, and I couldn’t be more thrilled to share it with you. Go behind the scenes and meet the faces and hands behind the beautiful pieces to get your live on at Alchemy Design Co.   Gosh, these things are just so…purdy.

“We want to make great products. We want to be a business that cares about people and that cares about the planet. That’s a big part of how we perceive the reclaimed wood idea because yes it looks beautiful but it also helps to articulate something in a context that values new money and new things; and the idea that we take something that you think is garbage but turn it into something beautiful.” – Alchemy Design Co.

Over the past few weeks, we have been able to eat lunch with, take pictures of, and invade the personal space of the guys at Alchemy Design Co. We feel good about this.

Joel, Willem and Jonathan, hail from the US, the Netherlands and Canada, and all landed in Cambodia to do something else. Initially working with another design firm, a solar company and an NGO, these three guys found each other through roommates and the teeny tiny community here in Phnom Penh. After doing some woodworking for fun and selling some pieces here and there, their cool hobby turned into a business, and it’s now thriving. 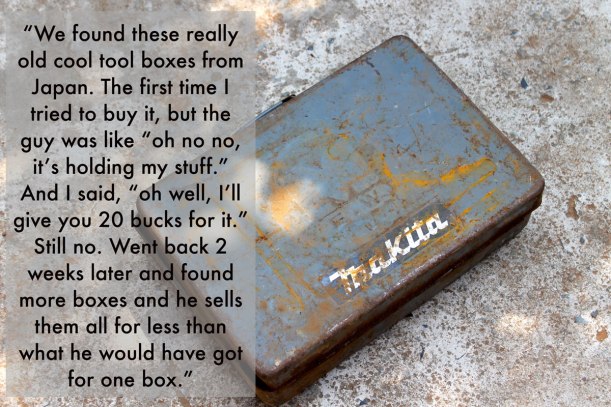 There are a LOT of furniture makers in Phnom Penh, but Alchemy brings something different to the table (oooh…lame pun…sorry). They work exclusively with reclaimed wood that they find in junkyards around the city, and from traditional wooden houses that have been demolished to make way for new concrete houses. These houses are often made of tropical hardwoods. Tropical hardwoods are coveted in other parts of the world, but are commonplace here, making the junkyard treasures that much more exciting. These older woods have also gone through the drying process, meaning the furniture is less likely to crack or change over time. Which is great, because we want their stuff in our houses forever.

“Alchemy is all about changing something from one thing to something completely new.”

They also use scrap and recycled metal, like rebar, for the details of their pieces, creating some of the most interesting stuff in town, or in any town. You won’t find any elephants or 19 layers of glossy finish on top of their stuff, thankfully. Instead, they choose to highlight the unique natural beauty of the wood in each piece. They are quite serious about turning trash into treasure. 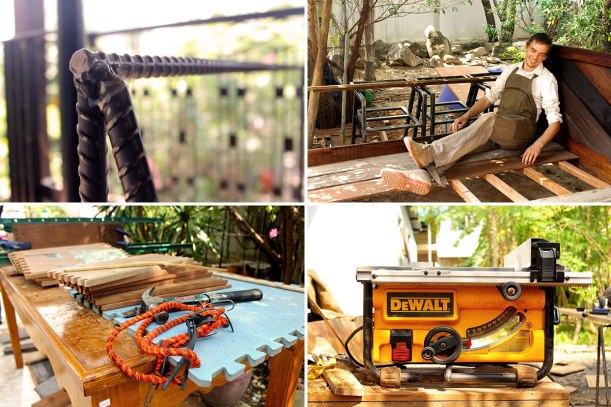 “Here is the glossy furniture that everyone recognizes as being very expensive, versus the product that’s artfully made, but is less obvious that it’s an expensive product.”

And my goodness, are they busy. With custom work for iThink Asia, Bearhanded Salon, and the classy masses of the ex-pat community of Phnom Penh, they are often working seven days a week to get orders filled in time. They are currently collaborating with an artisan leather worker, and adding new products and accessories to their collection. (Can we pre-order? Yes!) Sadly, Joel and Willem are leaving Phnom Penh for the time being, but they will stay involved, design from abroad, and keep the business going. Jonathan will keep things moving with the help of the local staff and an American they affectionately call “the Guru,” a woodworking pro and psychotherapist. Obviously.

“It feels like we have a lot of momentum right now. It kind of came out of nowhere.”

Moving forward, they are looking to formalize a training program and potentially team up with other local companies with the need for skilled workers. They have big plans, and are seriously about making a great business, and great products, with a unique customer meets manufacturer collaborative workspace and watering hole on the horizon.

Now, would you like to buy all the things? Us too. They are currently selling some smaller pieces at the Tonlé shop in Phnom Penh and for their larger pieces, contact them directly through their (gorgeous) website.

We are thrilled to have spent time with this group of dudes, and hope they keep doing their beautiful work for a very, very long time.

All photos by Tiffany Tsang. Please request permission for use.